Our friends were eating lunch meat sandwiches on store bought bread while we were eating home cured ham on fresh home baked bread, and we thought we were the ones doing without.

While our friends went out to dinner for mediocre meals, we were having home cooked meals made with fresh vegetables, meats and fresh herbs.

When canned soup became the rage, we were eating homemade soups which were made fresh daily.

We could never understand why kids went off to summer camp when we had it all year.

Our wildlife wasn’t a night on the town. We had turkey, pheasant, rabbits, deer, squirrel, etc. in the backyard along with peace and tranquility.

As hard working farmers, we were about 5% of the total US population who could take a seed, plant it, water it and watch it grow to maturity, harvest it, either eat it or preserve it or sell it to someone else who wasn’t capable of doing that. ​ 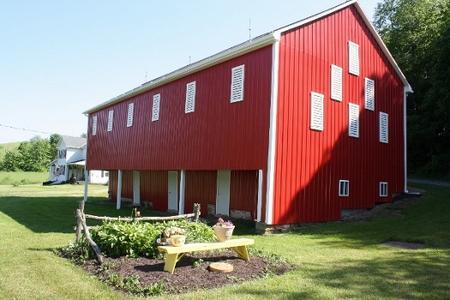 Life on the Farm

Growing up on the farm as kids, we thought we were poor. In retrospect, however, maybe it wasn’t so bad.

While some kids had swimming pools, we had a trout stream in the front yard that stretched endlessly and had a swimming hole built in it.

Most of our friends had either a dog or cat for a pet. We had several dogs, a lot of cats, litters of puppies and kittens, calves, pigs, chickens, horses, etc for pets. More pets than any other kid.

Our friends may have had a nice house on a small plot of land, but we had a 100 year old farm house with lots of character and memories complete with buildings and field upon field of land with an endless view of mountains on both sides of us.

Some kids had nice playrooms. But we had the biggest — a barn complete with a basketball court and ropes to swing on and to jump into the hay.

Some kids had street lights for them to see, but we had the whole sky of stars which brightly lit up the sky in the dark countryside.  ​

In grade school we were already trendy baby boomers wearing our blue jeans and flannel shirts, but yet we thought we were poor.

Watch for more information on our cooking and food safety classes.