6. This was Fred “Muckle” Lingenfelter’s place now known as Frank’s Place. For a while it was known as John’s Esso. Frank’s Place is located on Bedford Street south of the high school and sits near the Claysburg American Legion Building on the other side of the street. Carlton and Jessie Leslie owned the property and sold it to Dr. George Treese who sold it to his brother in law, Fred Lingenfelter in 1946. The station was built in 1946 and sold Esso Gas, did repair work on cars as well as selling snacks, soft drinks, tobacco products, etc.
In 1951, Frank’s father, “Iggy” Blazevich bought the business and continued the same services and products. Through the years, this small business has probably seen more of the Claysburg School student body through its doors than any other establishment in town. After school stops and sometimes during school, were common routines of many students. As a matter of fact, there were always a few detentions or school suspensions for visiting Frank’s.
Before school athletic practices and before and after games, it has always been a popular place. Frank Blazevich continues to operate the business, and it is still a popular place to visit by not only students but many other people of the community. 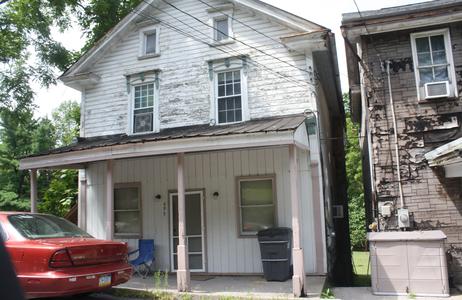 This is the Claysburg-Kimmel Auditorium building. Prior to this, the site was the home of the Claysburg High School building that was built in 1918.

This is the site today of where Bill's Place was located along Bedford Street just south of the bridge at Church Street. 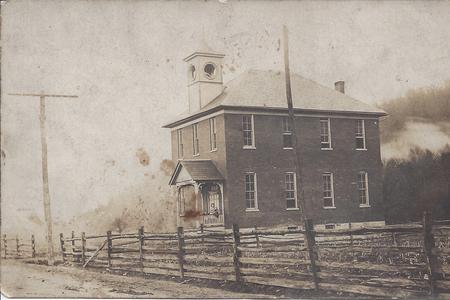 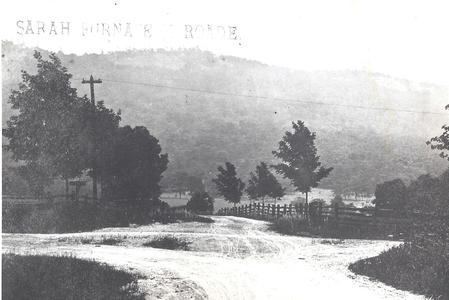 1. Abram Burket’s General Store which later became Bill’s Place on Bedford Street. Abram Burket started in the merchantile business in 1870 in Claysburg. After his death, his son, George I. continued the business for eight years. George then sold the business to another brother, Paul W. Burket who ran it for four more years. In 1939, Paul W. Burket’s son, William “Bill” started in business in the same place which was known as Bill’s Place. It was located on Bedford Street and was south of Klevan’s Store. Bill was married to Suie Knisely Burket who was from Queen, PA.

They operated the business until their deaths and sold many hamburgers, cheeseburgers, hot dogs and snacks and novelties. Bill’s Place also had four pool tables in the back room and was a busy area of activity for many people. Bill’s hamburger’s were steam cooked in a skillet on a regular kitchen stove and were some of the tastiest hamburgers around. Bill and Suie were highly successful business people.

3. This was the Claysburg Grammar School located on the present site of the Claysburg Post Office. It continued as a grammar school until the new Claysburg High School was built in 1918. This building later became the Claysburg Post Office and the belfry was taken off the roof. Then in 1960 it was torn down and an new post office was built which is still used. The upstairs of this building was used for meetings by different groups such as lodges, etc for a period of time.
Dedication of the current Claysburg Post Office occurred on November, 1960 and was originally the site of Claysburg Grammar School.
One side note, the earliest school noted in the area was located near Sproul Lime and Stone and was built in 1795 by John Swoveland at his expense. The second one was built by Adam Black in 1812 in Friesville or then Black’s Mills or Black’s Corner at his expense. He also paid for the school master. The next known school for Claysburg was Actually located where the Union Cemetery is located today. In 1914 Claysburg had only a small one room school building in Claysburg. About this time Standard Refractories in Claysburg and General Refractories in Sproul were beginning operations. Then a two room building was built in Claysburg and another two room school was built at Sproul. It soon became apparent that more class rooms were needed and other rooms were rented.

This is a view of the same intersection at Sproul looking east. Sheetz gas station and store is off to the middle left.

This is Frank's Place. The original site was built by Fred "Muckle" Lingenelter. 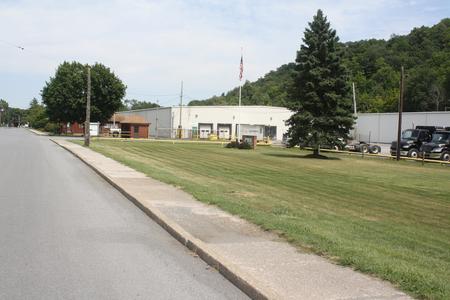 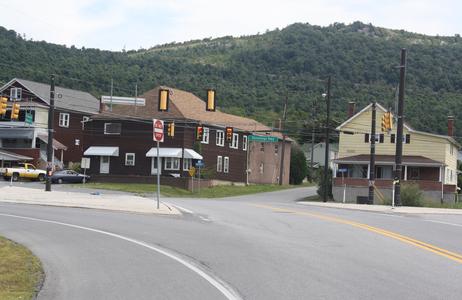 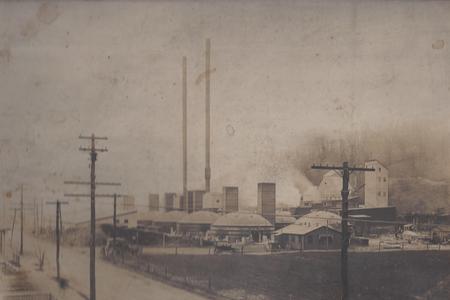 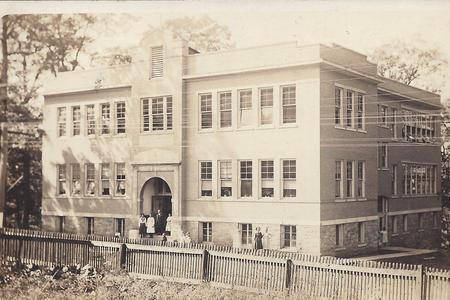 5. This photo is Claysburg High School built in 1918. It was located exactly where the current auditorium at Claysburg-Kimmel is located today. In 1914 Claysburg had only a small one room building in Claysburg. About this time Standard Refractories in Claysburg and General Refractories in Sproul were beginning operations. Then a two room building was built in Claysburg and another two room school was built at Sproul. It soon became apparent that more class rooms were needed and other rooms were rented.
Then in 1918 Greenfield Township erected a high school building. It contained seven rooms and an auditorium and some office space. The first graduating class from Claysburg High School was in 1920 when 11 members graduated under a two year high school program. This two year program continued graduation through 1925. Then a four year program was instituted and the next graduating class was in 1928 under the four year program.
This building was torn down in 1969 to make way for the construction of a new combined gym/auditrium. Then in the 2000's the gym was converted to strictly an auditorium and that still exists today.

This is the Claysburg Post Office that is located on the site of the former Claysburg Grammar School. This was built in 1960. 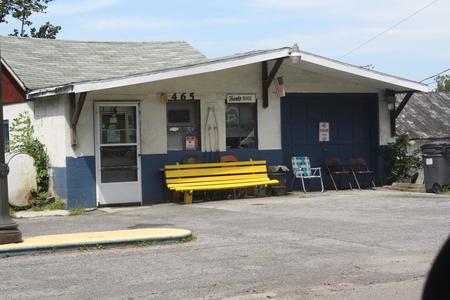 ​A Glimpse of History Then and Now in Claysburg Area!​ 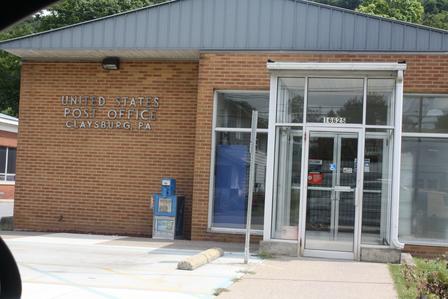 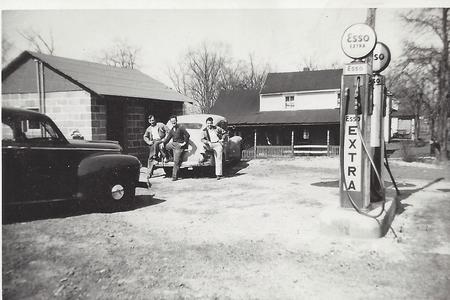 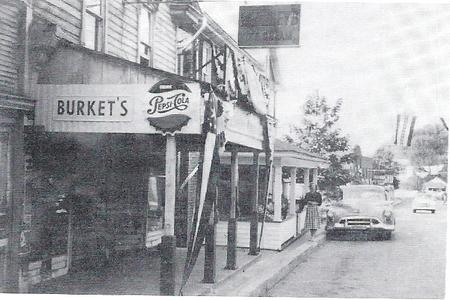 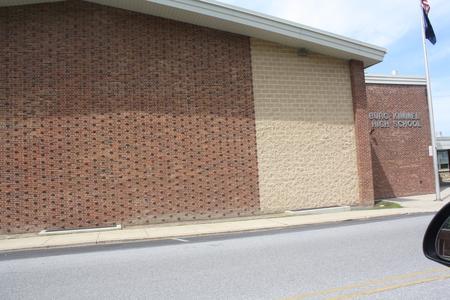 2. Sarah Furnace Road or Sproul Intersection. View is on road from Queen looking directly ahead towards Sproul - Notice No Houses!
Sproul Mountain is in background looking straight ahead to the east. This photo is estimated to be early 1900’s before General Refractories built the Sproul Plant. There were no houses in the town of Sproul. Sarah Furnace was located near the AP Green plant at the time. Notice the electric lines. Electricity was available for the General Refractories Plant that was built in 1910. However, this was before the plant was built and the town of Sproul was built. This was still called Sarah Furnace. You can read that on the top left of this photo. Claysburg would be turning left and Bedford would be turning right. The intersection has been reconfigured with Route 220 and then for the Sheetz company. Sheetz gas station would be on the bottom left hand corner since Route 220 would not be on this photo.