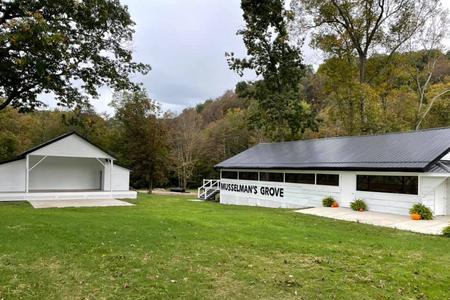 Music has always been part of the life of the Claysburg Area.  Our ancestors had a knack for playing instruments, singing and entertaining. Whether it was playing a fiddle, banjo, dulcimer, mandolin, horns of various types, drums and even kazoos, the Claysburg area has been entertaining since the first settlers arrived.

Many of these talents were brought from the Mother Country by the arriving immigrants and passed down through the years.  People were taught, trained, and cultivated to become performers.  Local places like Musselman’s Grove, Mayberry Claar Grove, and Barnhart’s Grove provided these local talented people with a place to perform and a few became quite successful over the years.   Musselman’s Grove has seen more entertainment on its grounds than most other locations in central Pennsylvania.  At one time, the Grove was a nationally known entertainment venue.

In the early days, people needed a way to be entertained locally since travel was not easy.  The original Musselman family came from Switzerland to Germany to avoid religious persecution.  Later they came to America and settled in Lancaster County.  In 1803, John Musselman and his family came to the Klahr area from Lancaster County.  They settled in front of the present Lower Claar Church where two large trees were planted and a cabin built.  The current cemetery behind the church started out as a family plot.  At one point, John Musselman’s family owned all the property from the Lower Claar Church to the Smoky Run Road.

Musselman’s Grove was originally part of the John Musselman, Sr. property.  Jacob Musselman, son of John, then owned the property which was passed to his son David in the early 1900s.  David’s son, John Musselman, who lived above the Upper Claar Church, owned the Grove until his death in 1982.   It is currently owned by Jarrett and Ashley Musselman.  Jarrett is a great grandson of John Musselman.

Musselman’s Grove was home to the Annual Claar Walter Reunion which was started in 1909.  (The first two reunions were not held at the Grove.  They were held off Picnic Road and then moved to the Grove.)  In the 1940s, both the Musselman Reunion and the Black Reunion were also held there.  It was the Claar and Walter Reunion that first brought some big named entertainment such as Grandpa Jones to the Grove.

Musselman’s Grove only had a few small concession stands and a small stage for picnics until 1946-47 when Doc Williams rented the property for $25 per week.  Doc rented the property for three years in a row in 1947-48-49 and then sporadically until the early 1970s.  An advertisement in the Altoona Mirror for a June 12, 1949 show listed the price of admission as 60 cents for adults and 30 cents for children.  The show started at 1:30 pm only two hours after church was over.

When Doc Williams rented the property, a joint effort between his crew and folks from the community built the current stage and cook shack.  They used cinder blocks and tree trunks topped with slabs of boards for seating. It was Doc Williams who put Musselman’s Grove on the map by bringing in big name country music stars.  Doc knew how to put on family friendly and entertaining shows.  In his book, Doc states, “At that time in 1947, it was the heyday of the country music parks in Pennsylvania. The crowds we had there were huge” - sometimes exceeding 5,000 people!  Doc also booked comedy and vaudeville acts like Martinez and his Animal Circus which featured a mouse and cat crossing on a wire.

In 1959, Frank Blazevich of Frank’s Place in Claysburg was in the military in Frankfurt Germany looking at the October, 1959 edition of Esquire magazine when he noticed a picture with a Coca Cola sign on a stage and thought it looked familiar.  Indeed, it was.  The magazine included an article written about Musselman’s Grove and Country Western/Bluegrass music.  The picture was from a painting by Tom Allen, a well-known New York illustrator, featured in the magazine.  Allen had visited the Grove to do the painting.   When Allen died in 2002, his paintings were selling for over $25,000!  The painting showed people dressed in black near the front of the stage.  The Esquire article referred to them as the “silently approving Amish.”  However, those people were not Amish; they were Church of the Brethren people from Upper and Lower Claar Churches.  Even up until the 1960s, especially the older members of the Brethren Church all dressed in black similar to the Amish or Mennonites.

Doc William’s shows were generally held on Sundays, not Saturdays, since he was performing on WWVA radio in Wheeling, WV on Saturdays.  Prior to the 1970s, PA Blue Laws prevented people from shopping even for groceries on Sundays.  Doc Williams, a smart promoter and businessman, worked things out so he could present family-style entertainment on Sundays.  He asked the Smoky Run Rod and Gun Club from Klahr to co-sponsor the shows.  Because they were a non-profit organization, they were allowed to have entertainment on Sundays.  Doc struck an agreement with the Gun Club to have the soda pop and ice cream concessions at the Grove with no commission paid to him.  Normally he charged 25% of the take as his commission.

However, there were still a lot of upset Brethren from Upper and Lower Claar because of having the shows on Sundays.  To reduce the unhappiness, Doc Williams hired many of these Brethren to work the events as ticket takers, security guards, cooks, etc., and paid them a dollar an hour which was a lot of money back in the late 1940s.  It was money they badly needed to help support families, and locals welcomed the work even though it was on Sunday.

In Doc Williams book Looking Back, he speaks fondly of Musselman’s Grove.  He was dedicated to making it a success.  Since he often worked on a tight time schedule because of his Saturday night performances in Wheeling and then his Sundays at the Grove, he would occasionally fly his Piper Cruiser Aircraft to the Grove, weather permitting, and land in a nearby cow pasture to get there on time.

Smokey Pleacher was born in Manns Choice, but moved to Claysburg as a kid.  We consider him Claysburg’s Smokey Pleacher.  He was a comedian who performed across the U.S. and on the Grand Ole Opry.  Smokey was with the Doc Williams Show from 1951-52 and later from 1960-70.  Betty Musselman has compiled an extensive list with dates of all the people who performed at Musselman’s Grove over the years including locals such as Smokey Pleacher, Jim and Jane Claar, Duggie Potter, and the Green Mountain Boys.  “Big name” performers included Roy Acuff from Hee Haw; Big Slim and his horse; the Carter Family with Mother Maybelle Carter and her sister and her brother; the Sons of the Pioneers, without Roy Rogers; the Chuckwagon Gang; Anita Carter and the Carter Family Girls with Hank Snow; Stoney and Wilma Lee Cooper, a husband and wife team from the 1940s; Johnny Mack Brown; Little Jimmy Dickens of Grand Ole Opry fame; and Mother Maybelle Carter and her three daughters, Helen, Anita and June, who married Johnny Cash.  Others who appeared at the Grove were Minnie Pearl from Hee Haw; Smiley Burnette; Ken Curtis who played Festus on Gunsmoke; Tex Ritter and his horse; Bill Monroe and the Blue Grass Boys; Cowboy Copas; Ernest Tubb; Crazy Elmer; and Eddy Arnold.  Grandpa Jones of Hee Haw appeared there five different times in 1947, 48 and 49, and Connie Smith, introduced by Hawkshaw Hawkins, had her debut performance at the Grove.  We will never know the names of all the stars who performed there!

One of the entertainment groups that drew a big crowd at the Grove was husband and wife team Lulu Belle and Scotty.  They were from Chicago and performed nationally.  They appeared at the Grove annually in 1947, 48 and 49.  They would take the Pullman train from Chicago to Altoona and then were picked up and driven to the Grove for their performance.   Their show on September 21, 1947 drew the largest crowd in the Grove’s history.  There were 8,600 in paid attendance.  The crowd was so large that they “hung from the trees.”  Doc Williams commented on the back of a picture from that show that there were “8,600 paid attendance plus thousands more who came in free.”  (Imagine the Grove with plank seats and filled with 8,600 people.)  Doc also mentioned that if all could have made it to the show and gotten in, 20,000 would have been in attendance.  The traffic was so bad that the PA State Police shut down the road to Klahr from Sproul.  People parked everywhere.  Doc was quoted in a 1996 PA Magazine article that they sold 640 cases of soda pop or 15,360 bottles that day and could have sold triple that amount!  Today we have modern stereo and sound systems.   However, Musselman’s Grove was operating with only 2 bullhorn type speakers hanging from 2 poles for the entire area.

The last Doc Williams show was held on September 9, 1973. It was a reunion show that featured Smokey Pleacher with much of the proceeds going to help with the construction of Claysburg’s Little League field.

Fortunately for the Claysburg area, John Musselman’s grandson, Jarrett and his wife Ashley, made the decision to resurrect the Grove.  Jarrett and Ashley began the long arduous task of renovation in 2019.  They have done a spectacular job to date.  We owe them a huge debt of gratitude for reviving a piece of Claysburg, PA history.  Today we are here to honor an historical place with a great tradition of entertaining people. 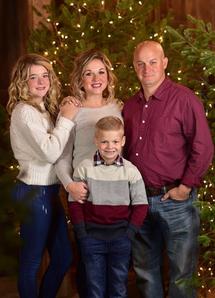