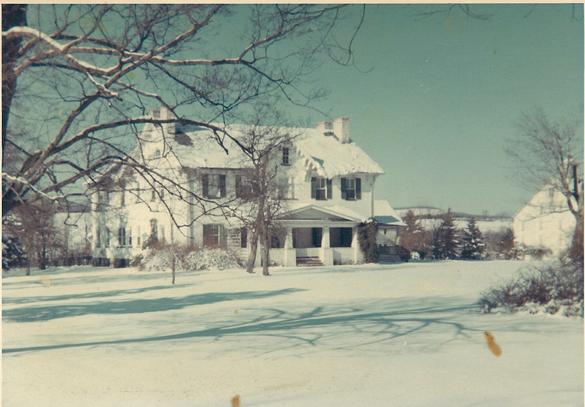 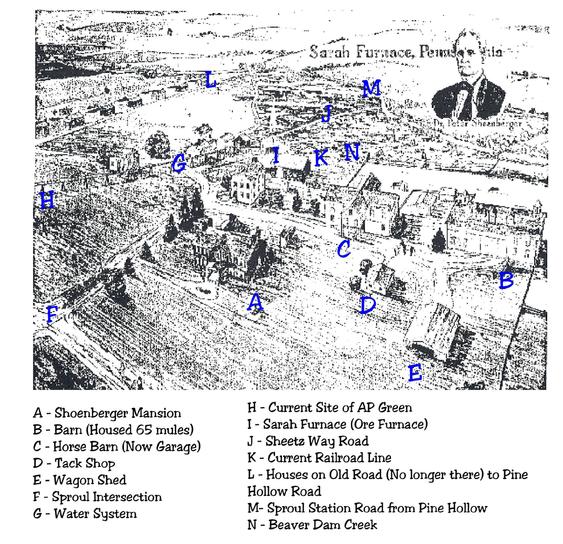 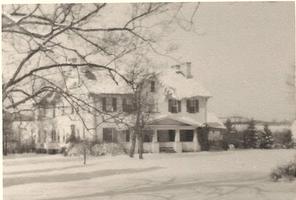 An order from Sarah Furnace in 1846 for Mr. McCormick 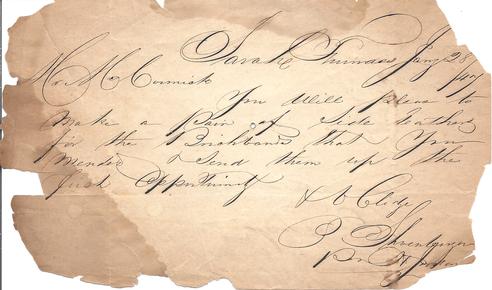 An order from Sarah Furnace in 1846 for Mr. McCormick

An order from Sarah Furnace in 1847 for Mr. McCormick 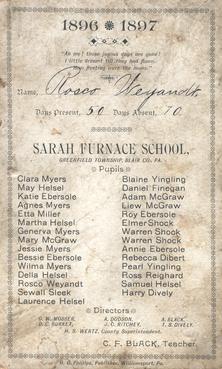 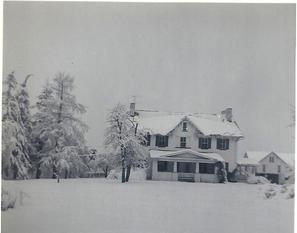 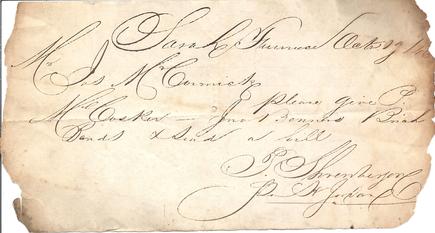 Shoenberger also built the mansion located at the corner of Dunnings Highway and Quarry Road at the Old Sproul intersection. The 21 room mansion had black marble fireplaces throughout it. The marble was imported from Greece. It was a showcase of a mansion at the time. A kiln was constructed in the yard to manufacture the bricks for the house since transporting them would have been very difficult at the time. A similar if not identical mansion was built in Fredericksburg, PA at Rebecca Furnace and still exists today.

The barn was built to house 54 mules for transporting iron ore from Ore Hill to Sproul. We really do not know the path these mules took across the mountain to deliver the iron ore.

Houses in Sarah Furnace were not located in the vicinity of Sproul as we know it today. They were located near the site of Sarah Furnace itself. The houses actually were across the road from the front gate of the current Harbison Walker plant and slightly south of the railroad spur leading into the plant. The houses actually parralled the railroad line and a road led to Pine Hollow Road from those houses.

As for Sarah Furnace itself, it was the first major place of employment in the area outside of farming. Iron ore was mined in Bloomfield Township and hauled across Sproul Mountain. Shoenberger with his vast holdings of furnaces and land and other properties traveled continually between Philadelphia and Pittsburgh generally on horseback. Shoenberger maintained homes in various places with his main home on 15th and Penn Avenue in Pittsburgh, Pa which stood until 1926.

Part of his thriving business eventually was in Pittsburgh, PA where steelmaking was coming of age and ironmaking was diminishing. His heirs sold part of the mills to US Steel.

Dr. Shoenberber and his wife, Sarah had 9 children: Martha married John William Duncan and who maintained the Bloomfield Ore mines and eventually the ganister and limestone quarries on Sproul Mountain that were essential in the making of silica brick using ganister rock from the mountain.

Anna Maria married Henry Watts, and they inherited the Marietta forge on the Susquehanna River.

George K. Shoenberger was twice married, first to Sarah Hamilton and then to Ella Beatty.

Unfortunately the fate of the large old mansion and buildings at Sproul is uncertain. They definitely have an historical significance to the Claysburg and Sproul area. Sheetz purchased the property in late 2019-2020.

William H. Shoenberger, of which no information is available.

Dr. Shoenberger died in 1854 at Marietta Furnace in Lancaster County. He is buried in Laurel Hill Cemetery in Philadelphia. Dr. Shoenberger’s estate totalled $12 million in 1854 which was a very hefty sum of money and property. In today's money, his estate would have been worth about $132 million!

Dr. Shoenberger’s will left Sarah Furnace mansion to his five grandchildren from Rebecca and Sarah’s marriage to Pollard McCormick with the stipulation that Dr. Shoenberger’s wife loved the mansion so much that the room at the top right of the stairs should be reserved for her use at her will.

Pollard McCormick, and then his son, David McCormick continued to operate Sarah Furnance, and the ownership passed to Essington Hammond and others. However, ironmaking was diminishing and steelmaking was coming into its own. Sarah Furnace closed in 1881 and was dismantled.

Many local businesses thrived because of the prosperity of Sarah Furnace. Joseph McCormick of East Freedom was one of them as evidenced by the orders from 1846 and 1847.

What we now refer to as Yingling’s Mill at the south end of the township and county line was originally built by Dr. Peter Shoenberger, and then passed on to various other owners and eventually to the Yingling family.

While none of the heirs of Dr. Peter Shoenberger are known to exist in the Claysburg area, Dr. Shoenberger and his family were quite benevolent and gave vast sums of money to build St. Margaret’s Hospital near Fox Chapel in Pittsburgh which is now part of UPMC - Pittsburgh and also gave to many other charitable causes.

Ironmaking was most profitable in its day only to be be taken over by the steelmaking industry. About the only reminders of Dr. Peter Shoenberger’s vast holdings in the area are the pits or ponds near Ore Hill where iron ore was mined and the ganister or silica quarries on Sproul Mountain that were quarried by his heirs, the Duncan and their relatives, the Hartman family for the silica brick business.

As for the Sproul Mansion, it was sold by the Shoenberger heirs to the Reighard family of Pittsburgh who was in the oil industry. They in turn sold it to General Refractories Company when the plant was built at Sproul and then owned by its successor company now called Harbison Walker. Sheetz then purchased the property in 2019-2020.  As for Sarah Furnace, the town was renamed Sproul in honor of Governor Sproul who was President of General Refractories at the time the plant was built. 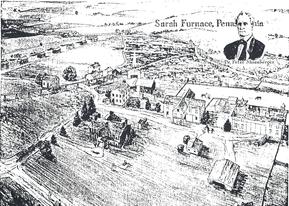 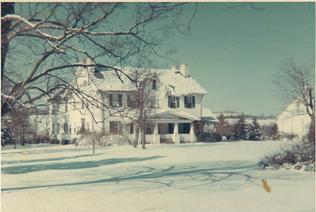 You may have heard people through the years talk about going to Sarah Furnace or the town of Sproul. In 1832 Dr. Peter Shoenberger built an ironmaking furnace near Sproul.   Dr. Shoenberger was born October 16, 1782 at Manheim, Lancaster County. He was of German descent, and his father, George had established little charcoal furnaces in the upper Juniata Valley. Shoenberger’s German ancestors had been operators of blast furnaces producing iron in Germany.

Dr. Shoenberger had graduated from medical school in 1806 and on June 17, 1806, he married Sarah Krug of Lancaster at Trinity Lutheran Church. Shortly thereafter, he gave up practicing medicine and devoted full attention to ironmaking.

Shoenberger was the ironmaking king of Pennsylvania and possibly of the United States at the time. His vast holdings included Upper, Lower and Middle Maria forges in McKees Gap, named for his aunt, Anna Maria Watts. Franklin Furnace and Forge near Hollidaysburg, Rebecca Furnace named for his daughter, Rebecca Shoenberger McCormick at Fredericksburg, east of Martinsburg and Huntingdon Furnace near Warriors Mark.

There was Martha Furnace near the Maria Forges, named for his daughter, Martha Shoenberger Duncan. Allegheny Forge near Foot of Ten, Sarah Furnace named for his daughter, Sarah Shoenberger McCormick, Bald Eagle Furnace near Bellefonte, the Center and Tyrone Forges on the Little Juniata River, Rodman Furnace near the Middle Maria Forge, Bloomfield Mines in Bloomfield Township across the mountain from Sproul near Bakers Summit, the Hollidaysburg Rolling Mills and Nail Works, Marietta Furnace on the Susquehanna River. He helped form Cambria Iron Company in Johnstown, Mt. Union Furnace near Uniontown, PA and vast properties that included timber, coal, iron ore and other mineral interests.

Shoenberger built Sarah Furnace in 1832. Many people have been of the wrong opinion of where it was located. It was not the lime kiln located on the old Sproul Mountain Road slightly east of Sproul before you go up the mountain.